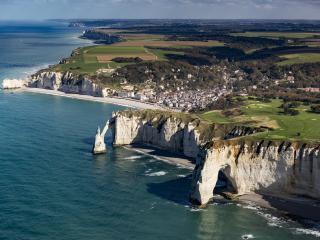 The local identity is defined by a great diversity of civil, religious, military, maritime, industrial, agricultural, and natural heritage sites.

Some of these heritage sites have already been acknowledged :

Since 2019, the Le Havre Seine Métropole area has been classified as a Land of Art & History in order to showcase the local heritage to the general public.

A whole range of activities is offered by the Land of Art & History Department to help you discover the local heritage :

The Land of Art & History Department works hand in hand with several local institutions and associations throughout the year and for special events supported by the Ministry of Culture, such as the European Heritage Days.

Each term, a very rich programme of events happening in the Le Havre Seine Métropole area will help you discover the local heritage with guides, lecturers, and other partners.

Each month, a different theme is addressed to cover various aspects of the local heritage.

The full programme of Le Havre Seine Métropole Land of Art & History events is available from the Maison du Patrimoine and can also be viewed online here.

For further information on the programme, feel free to subscribe to the newsletter : Email 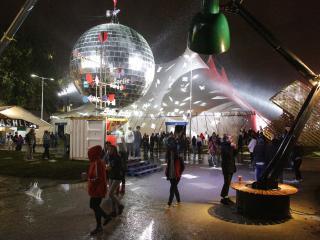 The culture of sharing

Music brings the locals together during major events for all audiences.

For over fifteen years, Ouest Park Festival has set up its marquees in the Fort de Tourneville each autumn, always offering a programme that covers all music genres. An event not to be missed !

Young audiences will love to take part in Ad Hoc Festival, a community event organised by Le Volcan and supported by Le Havre Seine Métropole that brings together thousands of children and their families.

Literature is not left out with Le Goût des Autres literary festival. Proud of its singularity compared to other literary events in France, Le Goût des Autres welcomes writers from all over the world to talk about their works and commitments with the inhabitants of Le Havre, a port with a teeming imagination.

The seventh art is also promoted through CinéSeine, a series of screenings held in Saint-Romain-de-Colbosc, and through the support given to all the open-air screenings that are held in the summer in the area.

Numerous other events supported by Le Havre Seine Métropole are also held in Le Havre throughout the year, on the initiative of local authorities and associations : Moz'aïk (world music festival, in Le Havre), Hello Birds Festival (in Etretat), Une Saison Graphique (graphic design festival, throughout Normandy), the European Heritage Days, the Nature Outings (throughout Seine-Maritime), etc.
This list is far from being exhaustive, so feel free to be curious !

Finally, this culture of sharing can also be related to the economic attractiveness of the area, as shown by the organisation of the LH Forum. Each year, over the course of this international event designed as a genuine positive economy laboratory, Le Havre becomes the meeting place for representatives of positive cities and territories. The LH Forum brings together decision-makers, influencers, scientists, and artists from around the world, and puts the spotlight on an area striving for experimentation and innovation. 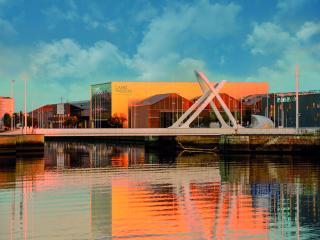 The modernity of the area rubs shoulders with its thousand-year-old history to become an excuse for celebrations !

Just as “concrete”, Béton celebrates the iconic material of the reconstruction of Le Havre with a programme combining music, architecture, design, and ecological values. This colourful and cross-generational summer festival offers a surprising mix of cultural boldness, guided tours, and live shows to help visitors discover Le Havre in a different way.

Spotlight on the local heritage

Each year, in Saint-Romain-de-Colbosc, Gromesnil dans tous ses états takes over the Château de Gromesnil for a series of events designed to showcase its beautiful gardens. One of them is the Fête du Cirque, which offers dozens of performances by groups and street artists – staged in the open or under a marquee – to the delight of children and adults alike !

Revisiting the artistic movement originating from Le Havre and the Seine estuary, Normandie Impressionniste is one of the major artistic events in France. Co-founded by Le Havre Seine Métropole, this multidisciplinary festival celebrates impressionism and encourages artistic creation in all its forms to revisit it.

Since 2017, another major event has attracted visitors from all over the world interested in contemporary art, modern architecture, and culture : Un Été Au Havre. Launched to celebrate the 500th anniversary of the city and its port, Un Été Au Havre unveils a new collection of temporary and permanent art installations each summer, transforming the city into an open-air museum.